A major incident in Ogof Ffynnon Ddu became apparent after an initial response on Saturday afternoon (6th November) confirmed a seriously injured caver. A full mobilisation of the South and Mid Wales Cave Rescue Team (SMWCRT) was initiated via SARCALL (Search and Rescue SMS text callout system) and the team WhatsApp by evening. The few words “Suggest bringing a sleeping bag” were a suitable indicator of what was to come. By late evening, the reports returned from the medical team, following their initial casualty assessment, confirmed that the shortest exit via Cwm Dwr was not feasible. The casualty had to be moved by full-length Slix stretcher and that would not pass the boulder choke and crawls. The implications of an exit through Top Entrance via the main streamway led to the rapid escalation of the incident and the call out was extended to members of 10 of the 16 BCRC cave rescue teams taking care not to deplete the operational strength of smaller teams in case of an underground incident elsewhere in Britain. The rescue endeavour that ensued until Monday night has been widely documented across the media. I wish to reflect on those involved in the rescue operation.

As a member of SMWCRT, first deployed underground 00:30-09:30h on Sunday, and episodically to the end of the rescue, and as chairman of the British Cave Rescue Council, I observed a great deal that was hugely heartening about cave rescue in Britain. The professionalism of those faced with an immense and daunting task and the organisation exercised by the surface control team was commendable in the management of such a large number of volunteers. The various parties of rescuers were deployed in the best way to most effectively hasten the injured caver to safety. Effective teamwork was clearly evident underground. I observed very effective integration of relief parties into the stretcher procession, which sustained momentum of the stretcher over numerous, significant obstacles from narrow rift passages, short pitches and slippery slopes, through the cascades of the main streamway, negotiation of boulder strewn caverns and crossing of avens.

There were numerous cameos played out throughout the rescue of small groups resolving the best and safest route or method to negotiate each obstacle immediately ahead. Specialist parties prepared the way ahead, with numerous pitches rigged impressively. The casualty shelter was erected, so that it would appear on the turn of a corner into wider passageway, as an oasis, affording the casualty a degree of privacy and warmth for essential medical examinations and comfort breaks. A scaffolding party set off to the streamway and worked to bridge the deeper plunge pools. The medical team was brilliant throughout, conducting essential medical examinations and interventions under very difficult circumstances of muddy, constricted or water sprayed passages. Huddled individuals, often shrouded in the fabric of rescue shelters to fend off the cold, sat in alcoves or widenings of passageways to operate Cavelink (a through rock communication system) and maintain the two-way flow of essential information to ‘Surface control’ at Penwyllt. Messages were sent to a surface Cavelink team, sat in the open above the cave, enduring the early winter weather, who relayed messages to and from the control by digital radio. A total of 256 cave rescuers were deployed, with a further 19 on site ready to assist at the time the rescue operation concluded.

As chairman of BCRC, I am immensely proud of how well the many cave rescue contingents melded into a single, integrated rescue effort in aid of a fellow caver in peril. Heartfelt thanks to members of all the cave rescue teams, who abandoned weekend plans to travel down to Penwyllt to assist. All contributed to the difficult situation presented by this incident over the course of the 54 hour rescue operation.

Finally, a special vote of thanks to the 24 members of the host club, South Wales Caving Club, who worked tirelessly around the clock to provide refreshments to the returning and outgoing groups of cave rescuers. Many also ran a virtually continuous washing up operation and assistance was extended to unpacking muddy tackle sacks, washing and repacking essential cave rescue equipment so that it could be put back into circulation where required later in the rescue. The successful outcome of the rescue operation in Ogof Ffynnon Ddu was of course from the cumulative action of all of these individual contributions, including those of mountain rescue and the statutory emergency services, including Wales’ Hazardous Area Response Team, on standby to offer support on the surface at Penwyllt.

I am sure you will join with me to extend our best wishes to the injured caver for a full and rapid recovery. I will close, stating two lessons of many for us all to consider. This clearly illustrates the serious implication if we should sustain an injury beyond significant underground obstacles and also the magnificent response that can be mobilised to assist, should such an accident befall any of us.

A few underground images of the rescue from SMWCRT 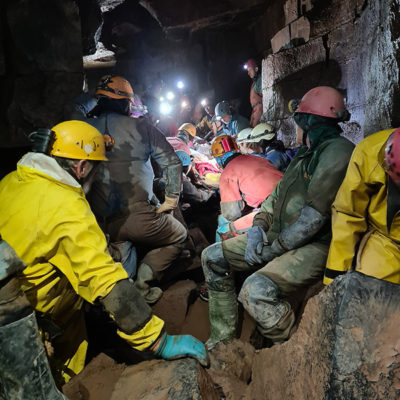 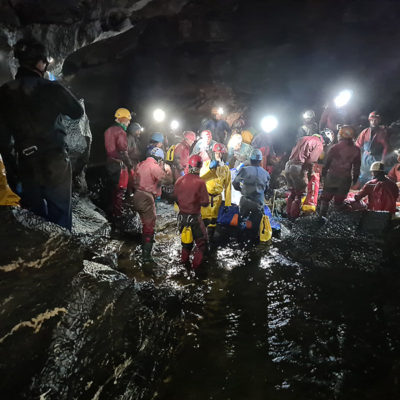 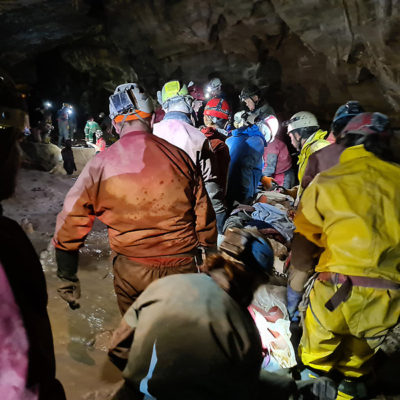 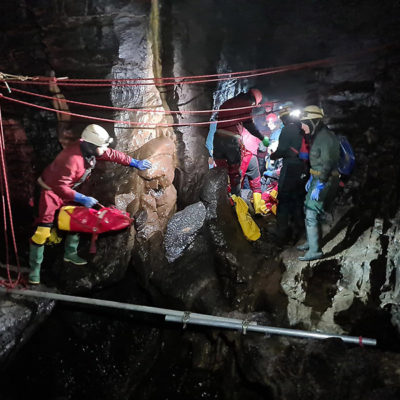 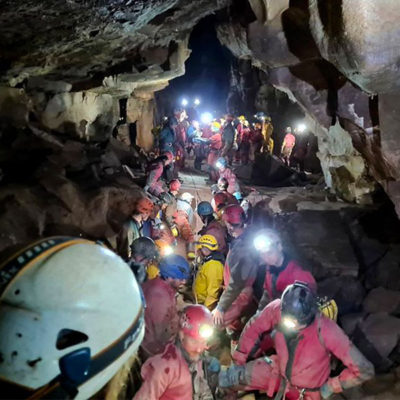 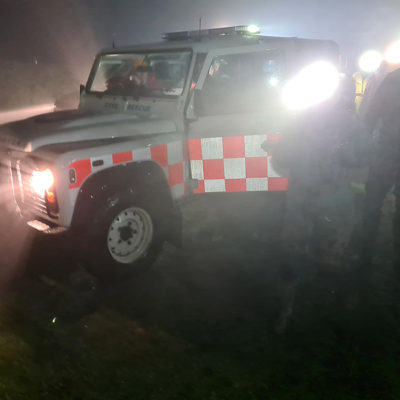