The bi-annual BCRC cave rescue conference, held over the weekend of June 16th to 18th 2017 was blessed not only with an interesting and engaging series of talks, workshops, and demonstrations but probably the hottest and sunniest weather encountered in Wales for years – it was a relief for many delegates, after the long climb to OFD Top Entrance to escape underground!

Hosted by South and Mid Wales Cave Rescue Team (SMWCRT) at Penwyllt the event was attended by over 80 cavers representing most of the UK cave rescue teams. Those making a long weekend of the conference were able to enjoy an introductory social on the Friday evening with a meal of Cawl (traditional Welsh lamb stew), huge chunks of bread and cheese, and some excellent apple crumble and custard (not necessarily all in the same bowl!), plus a bar run by South Wales Caving Club, while watching a series of caving and cave rescue slideshows and films (produced by Andy and Antonia Freem) in the marquee set-up for the weekend talks.

The Saturday events started bright (literally) and early with the arrival of the AW139 Coastguard Search and Rescue helicopter from St. Athan landing nearby. Conference delegates were then given guided tours by the crew and given chance to see the wide range of equipment carried on board. This machine is due to be replaced in October by a larger one, capable of carrying more people as part of improvements to the helicopter rescue service. 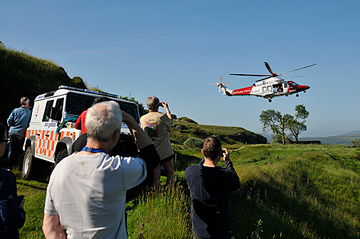 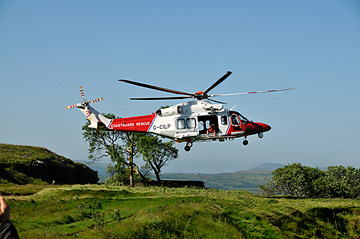 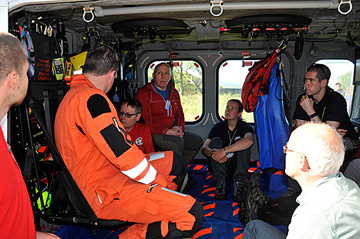 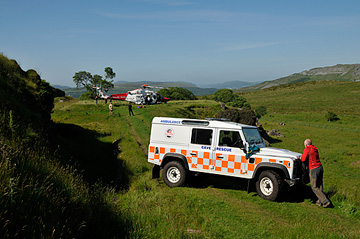 After returning to Penwyllt to re-fuel on Joppo’s cooked breakfast in a bun, the morning was given over to introductory talks by the local MP (Chris Davies), Bill Whitehouse (former chair of BCRC – who had to compete with the roar of the helicopter as it took off), Deputy Chief Constable Gareth Pritchard (talking about strategic changes affecting voluntary SAR teams working with Police), Dr. Brendan Sloan (BCRC Medical Officer – on the subject of recent changes to Advanced Casualty Care training and management of controlled drugs), followed by Jon Whiteley (Devon CRO) with an update on SARCALL.

The final talk of the morning was from Dougie MacDonald (from the Maritime and Coastguard Agency) and Clark Broad (Bristow Helicopters) with details of the latest developments on SAR Helicopters and a series of safety briefings and short film clips on working with helicopters – What to do and what NOT to do! (Be aware of down-draught, take care near the machines and don’t lose your head).

The morning was rounded off with SMWCRT team members demonstrating the stretcher obstacle course – the requirement being to carry a stretcher with a casualty that had a bucket of blue liquid for a stomach around an obstacle course without spilling any! The winning team would be the one that had the greatest depth of liquid left at the end of the course (no secret top-ups were allowed – the liquid should still be blue at the end, and cling film was banned), moving outside the designated course at any point incurred a 5mm penalty.

Over the weekend there were some excellent performances by the competitors – the ultimate winning “SMWCRT” team didn’t appear to have spilt anything! They each received a goody bag kindly donated by Cotswold Outdoors.

Scenes from the Stretcher Race 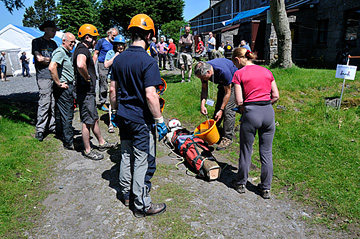 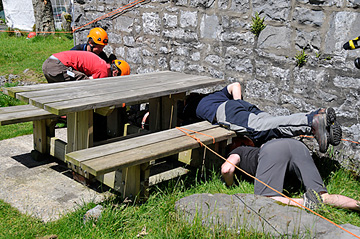 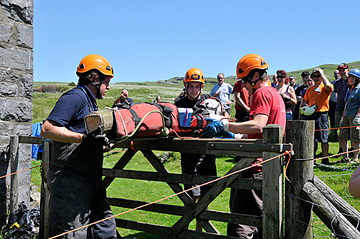 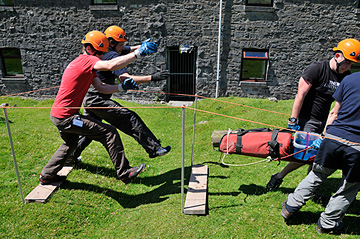 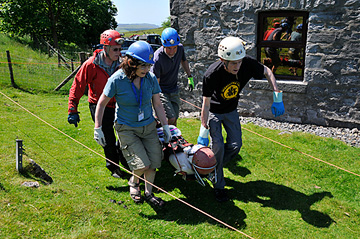 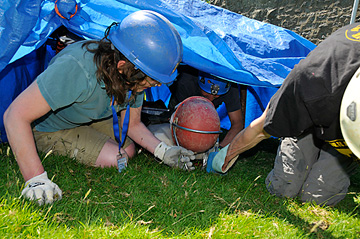 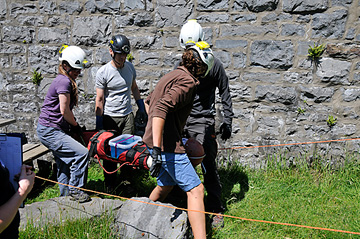 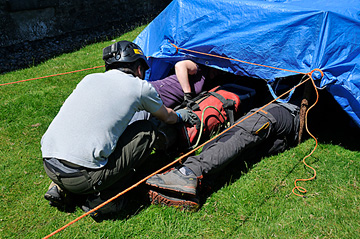 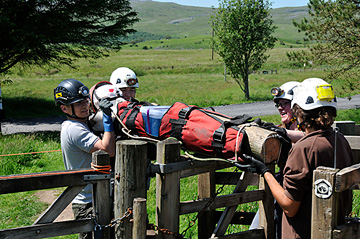 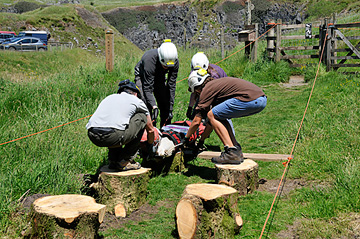 The afternoon sessions on both days were comprised of a series of ’round robin’ exercises, Q& A sessions and workshops both on the surface and underground, giving delegates a good choice of topics and skills to experience.

Rescuer safety was covered by Dan Murray (Derbyshire CRO) with an underground workshop on bad air detection, physiological effects and appropriate responses. While Vince Allkins ran an interesting ‘hands-on’ workshop in Party Quarry in the safe and effective use of  cordless drills in cave rescue, plus the techniques and requirements for the installation of resin anchors, and rock splitting with plug and feathers (sadly it didn’t cover how to avoid sunstroke while installing your anchors or splitting rocks!).

Comms were covered by both Cave Link (John Roe) and Nicola 3 (Graham Naylor and Peter Allwright) exercises and demos.

In parallel with all these workshops were a series of talks covering a range of topics such as the SAR Benevolent Fund (Bill Whitehouse) and kit innovations for casualty comfort and rigging an emergency bivouac (Ali Garman). Plus tours of the SMWCRT rescue facilities and rescue landrover loading and equipment demonstrations.

In addition to Lyon Equipment demonstrating new stretchers, rigging, and a new Quadpod, Hywel Jopling had a display of various rescue stretchers – including a ‘large’ bariatric stretcher,which would certainly test underground anchors if used to it’s capacity. Starless River and SP Medical Supplies were also in attendance throughout the weekend allowing people to inspect and purchase new kit. 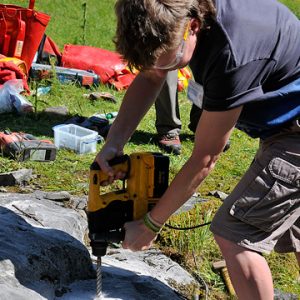 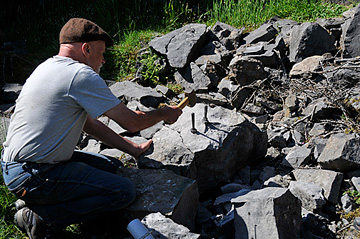 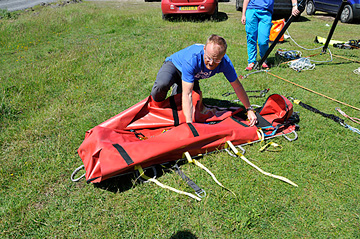 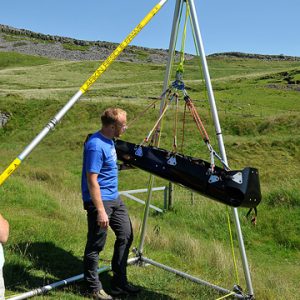 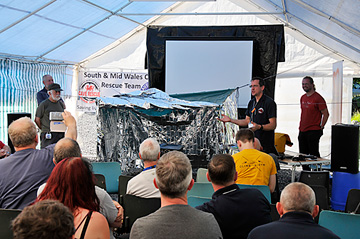 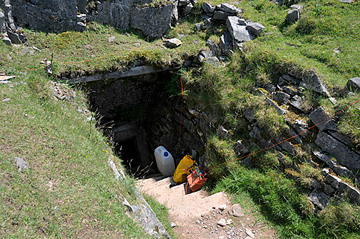 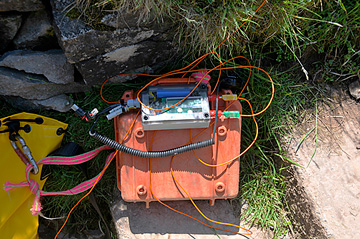 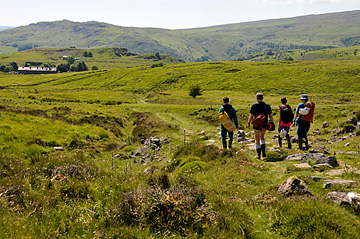 Saturday was rounded off with a coach taking delegates to Dan-yr-Ogof where they were entertained by a Welsh Male-voice Choir, a rugby club bar and hog roast (with superb cracklin’ !!) – there was a choice of vegetarian options too, plus a good selection of chocolate cake, tarts and cream! (Caving can be tough at times). Returning to Penwyllt good use was made of the warm summer evening for conversation and chats at the SWCC bar and a prize draw with prizes generously donated by Lyon Equipment and Starless River. 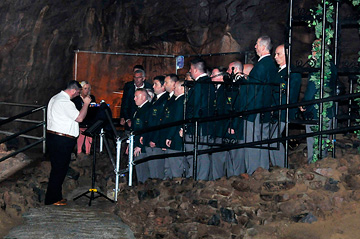 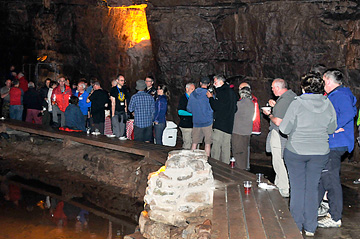 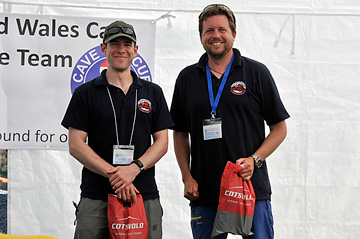 Congratulations to Peter Dennis (Conference Co-ordinator) and all the team members for their hard work in making the weekend such a success, not forgetting Ashford Price and everyone at Dan-yr-Ogof for the excellent evening entertainment and meal.