Peter Dennis (BCRC Chair) represented BCRC at this European Cave Rescue Association meeting, after many years of attendance by Pete Allwright, both as BCRC Secretary and more recently Foreign secretary. Difficulties were experienced when the original venue in Istanbul, Turkey, was changed to Croatia at late notice due to adverse travel advisory notices to Turkey issued by some governments that invalidated travel/ medical insurance for those concerned. Many delegates, as for Peter, purchased non-refundable, economy flights before the change was announced, so alternate travel had to be arranged, involving extra cost and a slightly more involved route to the event. This preserved the meeting programme but had a slight impact on participation. Peter was extremely grateful to Roberto Corti, who collected him from Venice Airport, followed by Giuseppe Conti (CNSAS, Italy) from Treviso Airport and Marek Vokáč (Norwegian Cave Rescue Team) from Trieste Airport before the drive through Slovenia into Croatia to reach the venue on Thursday evening.

This was a favourable first experience, with an excellent venue for seminars situated in a cave life exhibition hall surrounded by superb giant images of cave dwelling animals. The practical workshops were in the grounds or within Jama Baredine showcave, underneath the seminar room and café/ bar where excellent hospitality was provided by the bar and catering staff (owner Silvijo Legovi) literally around the clock!

Highlights for the seminars included contributions on several subjects, including:

Andrew Munoz provided a dramatic session on the cognitive science that explains individual behaviours and reactions under extreme, stressful situations. These were presented to help appreciate when irrational and rational decision-making is induced that can seriously influence the outcome of difficult rescue scenarios.

There were plenty of opportunities to discuss all aspects of cave rescue and make acquaintances each evening around the bar. Marquees with camp beds were provided as sleeping quarters on site but when a storm rolled over and rain began to spray through the partitions of the canvas panels onto sleeping bags and dry kit many delegates migrated with their camp beds into the meeting rooms and roofed picnic shelters around the venue.

After Roberto dropped Giuseppe and Peter at Venice Airport on Sunday (17th), Venice was reported as flooded for the fourth time that week and there were many disappointed international tourists wandering around the airport due to the famous heritage sites being closed. In fact, there were more wellies being worn or carried around the airport than were seen all weekend during ECRM!

To everyone involved from the European Cave Rescue Association and Croatian Mountain Rescue Service – Cave-Rescue Commission (HGSS – Hrvatska Gorska Služba Spašavanja– Facebook: @HrvatskaGSS) in organising this meeting at short notice and to fellow cavers who came together to help make this a successful meeting. 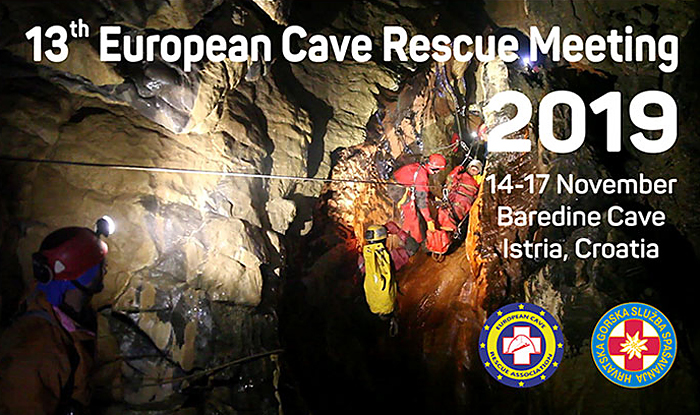