Gratitude was expressed to Russell Myers, British Caving Association and Phil Catling, Subterranea Britannica for the generous financial support received from both organisations for the BCRC casualty bag and rescue jacket equipment project. This enabled BCRC to fund provision of one casualty bag and one rescue jacket for each of the 16-member cave and mine rescue teams across Britain and Ireland. BCRC officers and representatives of most of the cave and mine rescue teams were gathered at the Derbyshire Cave Rescue Organisation HQ, based in the Derbyshire Fire and Rescue Service HQ at Buxton, for a scheduled training workshop on Saturday 9 April, the day before the BCRC AGM, so were present to thank Russell and Phil following the lunch break. 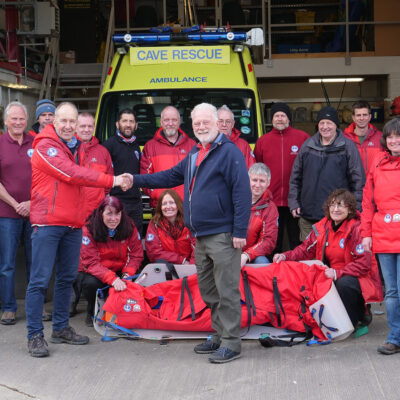 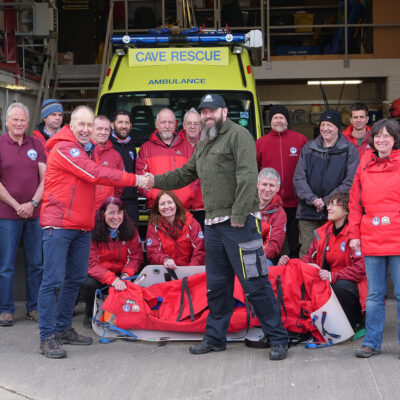 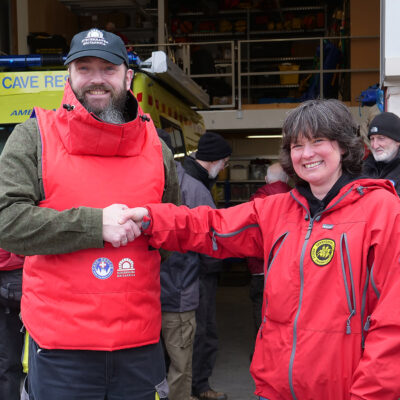 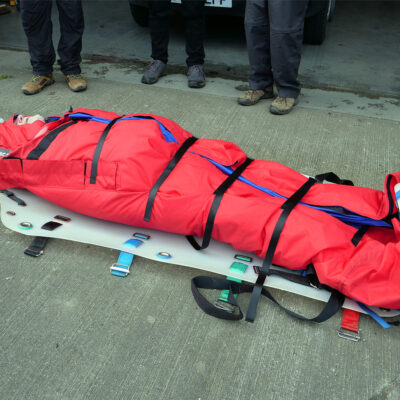 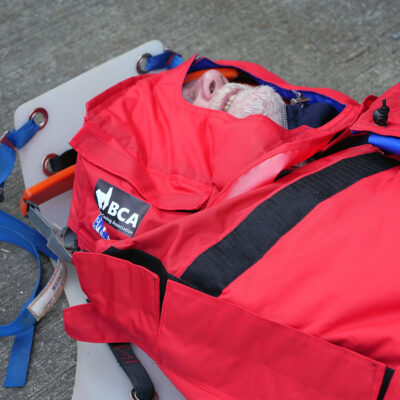 The concept and prototype of the casualty bag was devised by Ian Peachey, Upper Wharfedale Fell Rescue Association, and was supported by BCRC as an essential equipment development project to replace the ageing casualty bags currently in service. The aim was to adopt modern fabrics and insulation materials to achieve a lightweight, warm and easily fitted design, compatible as a liner for the recently distributed, redesigned Slix stretcher. Beth Knight, Derbyshire CRO, sewed and constructed prototype and final versions, working closely with Ian, Brendan Sloan (BCRC Medical Officer) and Jim Davis (BCRC Training Officer). The concept of the rescue jacket was devised whilst materials for the casualty bag were difficult to source, on thinking about a suitable garment for cold but uninjured cavers that need to be assisted out of a cave or disused mine.

The BCRC is grateful that several teams field tested prototype casualty bags and rescue jackets and provided valuable feedback to refine and improve the designs. Both items of equipment were augmented with integration of electrical heat pads, which proved a valuable additional feature to warm or to slow heat loss from a casualty. Only limited testing was possible during the Covid-19 lock down but there was very good feedback generated during the BCRC Medical Training conference hosted by Gloucestershire Cave Rescue Group at their base in the Forest of Dean on 17-18 July. Medical staff and advanced first aiders from many of the teams were able to scrutinise the features of the prototypes and generated valuable feedback that led to various refinements. That feedback and additional comments from teams once training exercises resumed in person, allowed the project to be concluded. Production will continue into the summer to complete the distribution of these items of rescue equipment for all cave rescue teams.